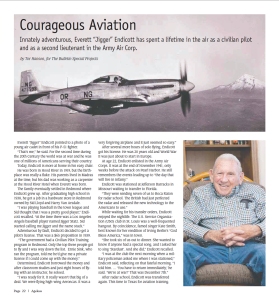 Innately adventurous, Everett “Jigger” Endicott has spent a lifetime in the air as a civilian pilot and as a second lieutenant in the Army Air Corp.

Everett “Jigger” Endicott pointed to a photo of a young air cadet in front of his P-51 fighter.

“That’s me,” he said. For the second time during the 20th Century the world was at war and he was one of millions of Americans serving their country.

Today, Endicott is more at home in his easy chair.

He was born in Hood River in 1919, but the birth- place was really a fluke. His parents lived in Madras at the time, but his dad was working as a carpenter at the Hood River Hotel when Everett was born.

The family eventually settled in Redmond where Endicott grew up. After graduating high school in 1938, he got a job in a hardware store in Redmond owned by Sid Lloyd and Harry Van Arsdale.

“I was playing baseball in the town league and Sid thought that I was a pretty good player,” Endicott recalled. “At the time there was a Los Angeles Angels baseball player named Jigger Statz. Sid started calling me Jigger and the name stuck.”

Adventurous by fault, Endicott decided to get a pilot’s license. That was a $65 proposition in 1939.

“The government had a Civilian Pilot Training program in Redmond. Only the top three people got to fly and I was way down the list. Ernie Sink, who ran the program, told me he’d give me a private license if I could come up with the money.”

Determined, Endicott borrowed the money and after classroom studies and just eight hours of fly- ing with an instructor, he soloed.

“I was ready for it. It really wasn’t that big of a deal. We were flying high-wing Aeroncas. It was a very forgiving airplane and it just seemed so easy.”

After several more hours of solo flying, Endicott got his license. He was 20 years old and World War II was just about to start in Europe.